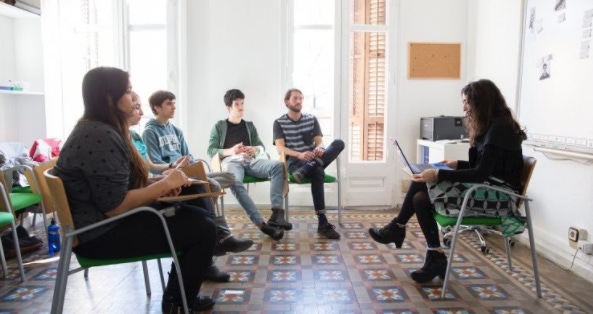 It’s International Women’s Day this week, so we thought we’d mark the date with a blogpost celebrating eight inspiring female teachers throughout history.

Born in Denmark, her parents died when she was ten years old, and the orphaned Natalie Zahle was fostered by a professor who enrolled her in the girls school Døtreskolen af 1791. She completed her education there and supported herself after graduation by working as a governess. After six years she applied to the only higher education course available for women, which led to a qualification as a school principal. After graduating, she opened her own school for girls in Copenhagen. Her educational strategy was developed through her teaching practice, focusing on promoting the idea of women as professionals, which was unheard of at the time. Many of Denmark’s first feminists and women pioneers in various fields were her students at one point or another. In the words of her biographer, “Natalie Zahle has been given many labels: chief, queen, commander-in-chief, reformer, seductress of women, school pioneer, empire-builder, entrepreneur – and a restless, searching soul.“

Born to a farming family and married at the age of nine, Savitribai Phule overcame inauspicious beginnings to play a major role in improving women’s rights in India. Her husband taught her how to read and write, and, having realised the transformative power of education, she became determined to empower other women and girls. She opened the first school for girls run by native Indian teachers in Pune, and went on to open eighteen more schools. She was India’s first female teacher and headmistress, as well as a poet, activist and social reformer, and spent her life campaigning against caste and gender discrimination. She was a believer in equal rights for men and women and advocated for social changes far ahead of her time, such as inter-caste and dowry-free marriage. She also opened a care centre for pregnant survivors of rape and a clinic for victims of the bubonic plague, where she contracted the plague after nursing the sick, and died there. In her own words, “Go, get education, end the misery of the oppressed and forsaken. You’ve got a golden chance to learn and break the chains of caste.“

Anne Sullivan had a hard childhood in Massachusetts. She contracted trachoma at the age of five which severely damaged her sight, and three years later she lost her mother to tuberculosis. Her father abandoned her and her younger brother to Tewksbury Almshouse. She learned about schools for the blind and became determined to educate herself out of poverty, and started her education at the age of 14. After she graduated, the director of the school found her a place as a governess to a blind and deaf pupil Helen Keller. Her hard work and ingenuity paid off after a couple of months, with Helen making a major communicative breakthrough. After working with her pupil, Anne ended up accompanying her to college, spelling the contents of lectures and textbooks into Helen’s hand. As a result, her pupil was the first blind-deaf person to graduate from college and the two women remained inseparable for the rest of their lives. In her own words, “I know the education of this child will be the distinguishing event of my life.“

Maria Montessori was born in Chiaraville, Italy, in 1870. Her mother was unusual for Italian women of the time in that she was very well educated and an avid reader, and she passed this love of education to her daughter. From a young age Maria was determined to overcome any obstacle to further her education, and enrolled in a boys-only school at the age of 13 to prepare to study engineering. She later changed her mind and decided to study medicine, an equally unusual choice for a woman at the time, and was one of Italy’s first female physicians. She focused on psychiatry, with a keen interest in pedagogy. Initially she worked as the director of a training school for teachers, but in 1907 she was asked to open a school for disadvantaged children in a working-class area of Rome. She developed unique learning materials and a classroom environment that encouraged the children’s natural desire to learn. The school was such a success that three short years later the schools had developed a worldwide reputation for excellence. Maria Montessori spent the rest of her life promoting her child-centred educational approach and advocating for women’s rights. In her own words, “education is not something which the teacher does, but it is a natural process which develops spontaneously in the human being.“

Mary McLeod Bethune was born into poverty in South Carolina. As one of seventeen children born to two former slaves, she worked from childhood picking cotton alongside her siblings. When a missionary school opened nearby, however, she begged her parents to let her attend, walking for miles each day to get to school and trying to pass on what she’d learned to her siblings when she got home after school. She won a scholarship and trained as a teacher in Chicago, returning to the South to start her teaching career. Believing that education was a crucial part of improving the quality of life for people of colour, she opened a school for Black girls in Dayton in 1904, which was later merged with another school to created the Bethune-Cookman college, one of the only places where African-American students could get a degree. As well as teaching, she also served as the president of the National Association for Colored Women, and worked as a special advisor to President Roosevelt on minority issues. She was an early member of the NAACP, and spent her life working to further the rights of people of colour and women. In her own words, “Believe in yourself, learn, and never stop wanting to build a better world.”

Septima Poinsette Clark grew up in Charleston, South Carolina, in a strictly segregated community. Her father was a former slave, and he encouraged Septima in her own education even though he was illiterate and unable to write even his own name until late in life. She trained as a teacher and became involved with the NAACP, remaining part of the organisation even after graduation, which made it difficult for her to find work. Eventually, with the Highlander Folk School, she developed literacy workshops for people of colour who’d had no formal education – Rosa Parks was one of the participants. This model was so successful that it was rolled out across the South; Citizenship Schools which taught adult literacy, as well as how take collective action and protest against racism. In her own words, “knowledge could empower marginalized groups in ways that formal legal equality couldn’t.“

Born to a well off family, Sudha Varghese joined the Catholic Church as a nun and worked at the Notre Dame academy in Bihar, but after a few years of teaching at the academy she resigned her job to move to a complex and educate the Musahar, one of the most marginalised groups in India, with literacy rates below 1% in Musahar women. Sudha Varghese taught groups of girls to read and write in her home, and before long she had set up five centres for girls education, teaching not only literacy but also basic skills such as nutrition and sanitation. She did a law degree so she could offer legal representation to survivors of rape and sexual assault, and went on to set up boarding schools for girls, where they receive an education but also learn about their constitutional rights, as well as teaching arts, dance and karate for self-defence! In her own words, “What opportunities are we giving to children? Education is foremost; without it, they have no power to make choices about what they want or can accept.”

Born in a Massai village as the eldest of eight children, Kakenya Ntaiya was aged five when she was engaged to be married at puberty. Her mother encouraged her to go to school and get an education so she could be independent. She dreamed of becoming a teacher, and threatened to run away from her FGM ceremony if she wasn’t permitted to attend secondary school. After enduring her circumsion, she returned to school, even more determined to become a teacher. She won a scholarship to an American college, and after graduated continued her education with a doctorate in education from Pittsburgh University. When she returned to Kenya, she opened a boarding school for one hundred and twenty-five primary-age girls, whose parents have to sign a pledge that they won’t allow their daughters to go through FGM or forced marriage.  She is a tireless advocate for women’s rights. In her own words, “By impacting one girl, one family, one village, one community, we are creating a better world.”

Who is your teaching inspiration?