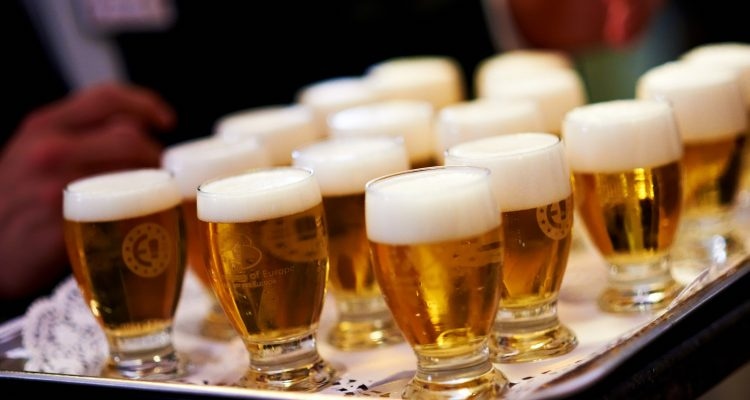 The craft beer scene has been growing in popularity across Europe in the last 5 years, with the number of new breweries almost doubling since 2008. Most people, when they think of Spanish beer, would think of Estrella or San Miguel, but Spain also has over 300 microbreweries, with around 40 of them in Catalunya. Overall there’s been a growing appetite for locally sourced, artisan goods, where people feel a connection to the product because of its local provenance, and the craft beer scene in the city reflects this. For anyone who’s interested, the Brewers of Europe guide to brewing beer makes for interesting reading. So for all the beers lovers out there – we’ve put together a guide to our favourite craft beer bars in Barcelona for the next time you have a drouth. Just don’t blame us for your hangovers!

This Barceloneta brewhouse is our favourite place for Saturday afternoon beers – their big outdoor seating area is the perfect place to enjoy a craft beer in the sunshine! Their own range of beers are brewed onsite and they have a decent menu too – a mix of Asian food and American classics like burgers and ribs. Their opening hours are shorter over winter, closing at midnight most nights, but the kitchen is open until midnight too so it’s a good shout for a late dinner!  Try our favourite of their beers – El Importador, an amber rye ale.

This Belgian beer bar has a wide selection of classic Belgian beers. It’s a chilled out space, with sofas – SOFAS – instead of the ubiquitous wooden chairs you get in Barcelona bars, so it’s a great choice if you like to combine craft beers with watching the football – they show all the big matches. There’s also live music on Saturday nights. Order anything from the Barna-Brew range, a local brewery who specialise in Belgian-style beers with a local twist.

This bar and brewery in the tourist-free, working class neighbourhood of Sants was one of the first craft beer temples in the city. They stock beers from all over the world, as well as a good selection of locally brewed Catalan beers, but our tipple of choice at Homo Sibaris is Sants, their homebrew. They’re open until 2am at the weekends and the atmosphere is always lively, with live music and events.

Nowadays a little commercial but still very good. They opened in a refurbished bank in L’Eixample a few years ago and have quickly become a popular fixture on the craft beer scene. They offer 20 taps in a stripped back setting and the bar is open until midnight Sunday to Wednesday and until 2am Thursday to Saturday – you might intend on only popping in for one but you’ll end up there for the night! Their biggest beer is the unmissable Punk IPA, and we’re also big fans of the Vagabond Pale Ale (gluten-free).

The best of the rest

The Edge Brewery in Poblenou is also a great place to sample craft beers. Usually closed to the public, they have occasional open evenings – the next one is on Friday (tomorrow), and you need to sign up, but once you’re in you can go for a quick tour of the brewery and test out their most recent brews. Local restaurants are sometimes invited to host a street-food style stall if you want something to snack on alongside your beers, and you can even buy a growler of your favourite brew to take home!

From the 3rd to the 5th of March, the Barcelona Beer Festival will take over the Maritime Museum for the fifth year in a row. The festival has been getting bigger and better every year, and this year there will be 60 different taps and over 300 beers available. A must for any craft beer aficionado!

What’s your favourite craft beer spot in the city?