The Architectural History of our School 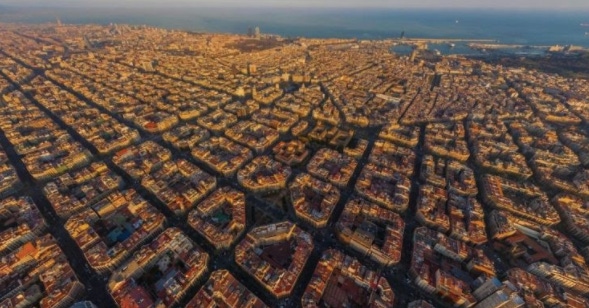 The nieghbourhood of L’Eixample, where our school is situated, didn’t exist in the early 1800s. The city of Barcelona was what is now known as Ciutat Vella, surrounded by walls and bordered by the Mediterranean, with rampant overcrowding and all its attendant problems. City planners decided Barcelona needed to grow, and Ildefons Cerda, a Catalan urban planner, designed his vision of an ideal city in 1855 – L’Eixample.

Structured on a grid pattern, Cerdà designed the new neighbourhood with his personal principles of healthy living in mind.

The urban plan of L’Eixample

Today, L’Eixample is comprised of 520 city blocks, laid out along streets that run parallel and perpendicular to one another. Cerdà was a firm believer in everyone’s right to decent housing, and he envisioned a district in which working class and middle class families would live side by side. He was strongly influenced by the sanitarian movement and believed that sunlight, greenery and ventilation were crucial to a healthy population, without neglecting practicalities such as tram lines, traffic, waste disposal and gas pipes. Markets and schools were allocated to every district, and the streets were planned on a northwest to southwest orientation so that the buildings would get as much sunlight as possible. Each block was designed to be octagonal, so that street intersections would feel more spacious and airy, and Cerdà originally intended a block to have apartments built on two or three sides, with the fourth side and the inner courtyard used to create a garden for residents. Sadly this stipulation was ignored in favour of rampant property speculation, and today the vast majority of the blocks remain enclosed, with the inner courtyard divided into private terraces. The superblock plan proposed by the city administration could see lots of streets becoming pedestrianised, however, with more space for people to walk and children to play, in the spirit of Cerdà’s vision of a neighbourhood full of communal social spaces for the inhabitants.

Cerdà’s contemporary architects opposed his city plan, accusing him of trying to promote socialism, but once construction began many of them designed buildings in the new neighbourhoods. The Quadrat d’Or, where our school is located, is the part of L’Eixample around Passeig de Gracia, between Carrer Aribau and Passeig de Sant Joan. Barcelona’s wealthy families began building their homes here, hiring architects like Antoni Gaudi, Lluis Domenèch i Muntaner, Josep Puig i Calafalch, Enrique Nieto and Josep Maria Jujol. These architects were all proponents of the Modernisme style, designing buildings characterised by ornate shapes, use of iron, wood and coloured glass, curving lines, mosaic floors and floral decoration which gave the Quadrat d’Or (the golden square) its name. The profusion of styles and details has made the centre of Barcelona one of the most architecturally interesting in Europe. La Manzana de la Discordia is probably the most famous block in L’Eixample. Its name is a pun – una manzana is the word for block in Spanish, but also the word for apple. So named because of the clashing architectural styles of the buildings, La Manzana de la Discordia also refers to the apple in the garden of Eden.

Our school and its architectural details

The premises of TEFL Iberia and Languages4Life at 275 Carrer de Valencia, is within the Quadrat d’Or. Our building is a traditional Modernista building, with an ornate vestibule and enormous wooden doors. The school takes up the third floor of the building, with the high ceilings and large windows characteristic of this period. The majority of the doors and windows are original, with sliding doors leading from the large library into the gallery, which features floor to ceiling original windows looking out over the interior of the block. A few of the windows still have the coloured glass inserts so popular with Modernist architects and there are original ceiling roses and elaborate cornicing in several classrooms.

The feature that all our students comment on first is the tiled floors, however. With eight different designs through the building, our mosaic tile floors are a constant source of delight and the pride of our Instagram page! The process of making hydraulic tiles was developed as Modernism was becoming more and more popular, and these decorative floors made of pigmented cement can be found in many of the buildings in L’Eixample.

We feel lucky to work in such beautiful surroundings and we’re sure you will too!